Talk about the champions, or the Top 25 nationally-ranked team!
Post Reply
8 posts • Page 1 of 1

My hometown historical association posted on their Facebook page an old photo of my father beating Gobel Kline in the 1963 District IV semi-finals. Pleasantly surprised, since I lost his scrapbook in one of my moves. But it also reminded me of the following thread on the old forum, when Legger and the Musclehead called me out. Didn't have the documentation then, but I've recently discovered Newspapers.com...

mr_ftl wrote:My dad, who was at Maryland prior to transferring to Lock Haven, owns a victory over Kline.

John Henning wrote:....... owns a victory over Gobel Kline in the practice room at Maryland or in competition while at Lock Haven? What year and who was your father?

Legger wrote:**** John I will be very surprised if you get a straight answer from "mr_ft". I think he is another poster who likes to remain hidden in cyber space. Who knows maybe he will surprise me.

Teammates at Maryland in the Fall of 1965, Dad transferred to be closer to home and married my mom in April of 1966 (RS Frosh photo below). Their HS post-season summaries: 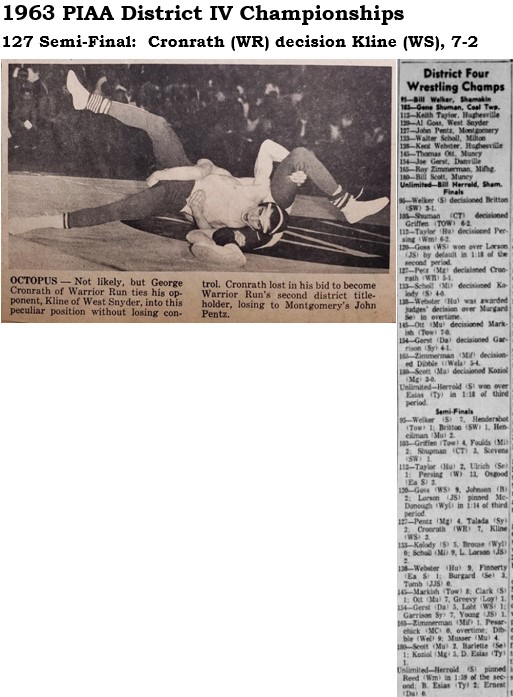 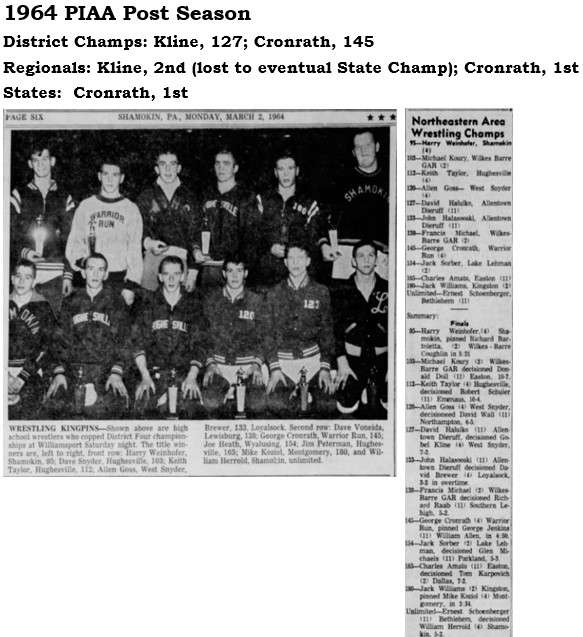 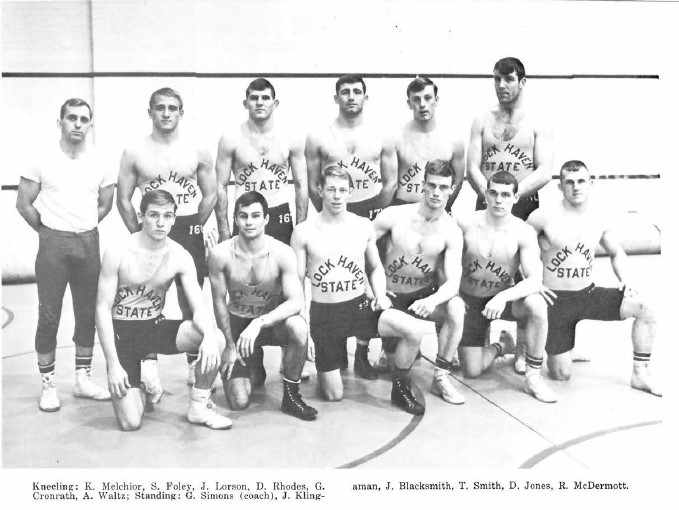 It is good when others are shown errors of their way.
Top

Reminds me of the night I attended LU win at ASU in '19 and entered the post-game LU reception. Quickly spotted a good-looking couple, one was Lee Martucci '81 (impressed with my memory? Umm, name tags help a lot). Had a really chat after re-introducing myself, quickly citing his most impressive wrestling stat which some of you whizzes will readily recall; Lee's doing very well in his life in Colorado (sorry, I forget his job) ... in hs at Council Rock he owned not one but three wins over John Reich, future Navy stud class of '83 (1 of 3 best-ever Mids). With injuries a factor, Lee finished 1-2 for us at 158, highlight was an 11-10 dual win on 1-29-80 vs. Springfield U. It would be the last of 10 mtgs for LU-Springfield.
Top

Assume Martucci was 82 unless he graduated early. He came in with Burley, Weaver, Schuyler, Turner who were all 5 years, graduating in 83
Top

Ah yes. District 4 and the Central Susquehanna Valley in the early sixties. Tremendous wrestling tradition in that area. Warrior Run, which still is a fairly small school in the Watsontown area, always had a very good program. As a Milton graduate ('68) I was thrilled when Milton's Ryan Preisch was at Lehigh.

My reason for posting is that in those days there was just one class for each weight. So winning a district title back in '63 meant you had to beat EVERYBODY in the district regardless of school size.

Also from that immediate area and era, another tremendous wrestler from tiny Hughesville high, Clyde Frantz. A Pa. state champ and later a Lehigh tormentor at Penn State during the end of the '60s. A close friend of mine had to wrestle Frantz our sophomore year in Milton. It didn't last long.
Top